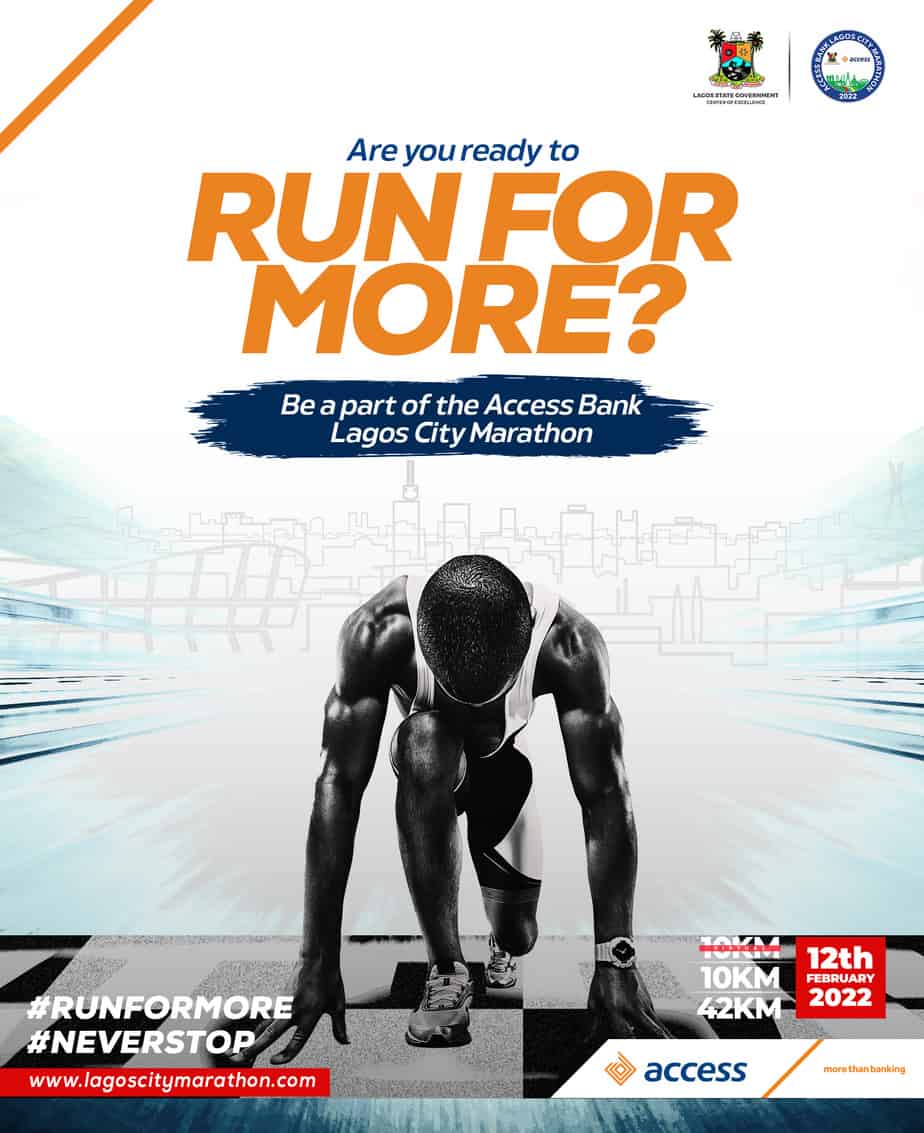 Participating in the most anticipated race of the year often comes with much excitement and is driven by different goals. For some, it’s the will to get to the finish line first. For others, the thought of just being on the track and having some fun with friends is enough motivation.

Whether running with the mind to win or just running for the love of it, the Access Bank Lagos City Marathon (ALBCM) 2022 is a race to be prepared for. Although the 2021 edition was an Elite-only race with only 300 athletes in attendance, this year’s edition promises to be bigger and better with an open call to all members of the public.

The marathon expo has been slated to commence from February 1st – 10th, 2022, at the Teslim Balogun Stadium from 9 am – 6 pm daily. The organizers of the event have put in place stringent. Covid-19 measures to safeguard the health of all participants, and all athletes and workers are to adhere strictly to the laid down rules. Crowd control measures have also been implemented to reduce overcrowding and its effects.

While basking in the euphoria of this upcoming event, intending participants should not forget to discover their level of physical and medical fitness for the race by checking with their physicians. A marathon is not just for the swift; it is for the tactical, the enduring, and the disciplined.

Therefore, prepare your body in advance by exercising, staying hydrated, and having a mental plan. You can also check out the marathon’s medical advice page for helpful tips and information. 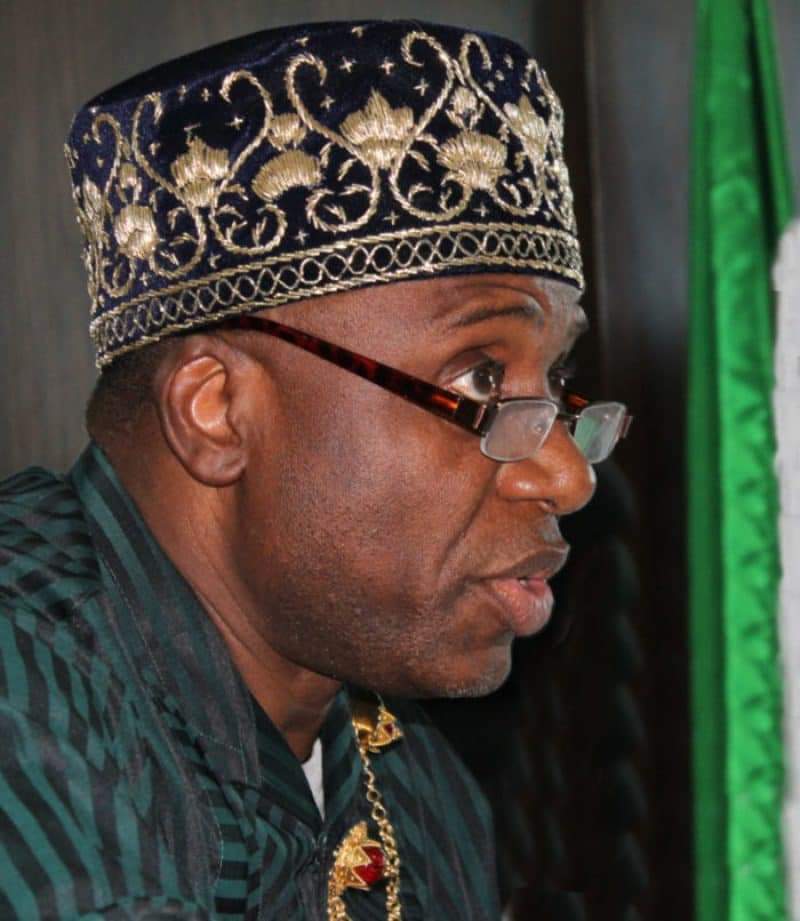 [Lagos, Nigeria – 21st February 2022]: Triller, the AI-powered open garden technology platform for
creators, celebrates Nigerian artists Skiibii and Davido, whose single, ‘Baddest Boy’ has rocketed to the
top of Billboard’s Top Triller Global chart this week and #2 on the Top Triller U.S. chart in just three
weeks. The popular Afrobeat acts have teamed up to thrill fans with a remix of Skiibii’s original single,
released in November 2021 and produced by rising star beatmaker, Runcheck.

This year, Nigerian music continues to dominate the Top Triller Global and Top Triller U.S. charts.
Baddest Boy’ comes hot on the heels of ‘Follow You’ by Fiokee, which leaped from the #10 spot to #1 in
just two weeks, replacing another Nigerian single, ‘Peru’ by Fireboy DML and Ed Sheeran, and following
CKay’s #1 single ‘Love Nwantiti’, which debuted in December. Both U.S. and Global Triller charts on
Billboard feature the biggest songs on Triller based on a formula that takes into account the number of
user-generated videos featuring a particular song, number of views, and the level of engagement other
users have with the videos. The ranking is based on weekly tracking from Friday to the following
Thursday.

Skiibii, born Abbey Toyyib Elias, is a Nigerian singer, songwriter, and stage performer who was signed to
KCee’s Five Star Music in 2014, releasing a number of songs under that label, including ‘Ah Skiibii.’ He
has since left Five Star Music to form his record label, More Grace Music, dropping such hits as ‘Sensima’ with Reekado Banks, ‘Daz How Star Do’ with Teni and Falz, and ‘Omaema,’ among others. He has been nominated for the Nigerian Teen Choice Award and the Top Naija Music Award for Artiste of the Year.

Davido, born David Adedeji Adeleke, is a Nigerian-American singer, songwriter, and record producer
known for blending traditional African elements with global mainstream pop. He has released a number
of hits since 2013 and signed a record deal with Sony’s RCA Records in 2016. His single, ‘Fall,’ released in 2017, became the longest-charting Nigerian pop song in Billboard history.

“We aim to empower Africa’s hottest and most original creatives with a global platform to showcase
their work and partnerships with the world’s leading brands,” said Joel Houenou, Strategic Partnerships
Director for Triller Africa said. “Through the power of music and by redefining online content, we are
setting out to provide a channel through which people from very different social and cultural
backgrounds can find their true paths and speak out in their voices.”

Triller’s mission resonates with audiences throughout Africa and across the globe, inspiring a new
appetite for African artists’ musical, artistic, and cultural expressions and providing an international
platform for the unique talent coming out of the area. ‘Baddest Boy’ proves that African music is
intensely innovative and appeals to a global audience.

Triller is the AI-powered open garden technology platform for creators. Pairing music culture with
sports, fashion, entertainment, and influencers through a 360-degree view of content and technology,
Triller encourages its influencers to post the content created on the app across different social media
platforms and uses proprietary AI technology to push and track their content virally to affiliated and
non-affiliated sites and networks, enabling them to reach millions of additional users. Triller additionally
owns VERZUZ, the live-stream music platform launched by Swizz Beatz and Timbaland; Amplify.ai, a
leading customer engagement platform; FITE, a premier global PPV, AVOD, and SVOD streaming site;
and Thuzio, a leader in B2B premium influencer events and experiences.

Uniqtak Investment: The best investment market with UpTo 30% interest in 2022 Uniqtak in an Industry Leader, Professional, and Reliable Company. We provide you with the most necessary features that will make your experience better. Not only we guarantee the fastest and the most exciting returns on your investments, but we also guarantee the security of your investment.

Uniqtak helps you save and invest with ease. With Uniqtak, you can stop spending excessively and put away (and grow!) funds that you do not want to touch.

Interest Save, Invest and Grow your money with ease. Earn up to 25 to 30% on investments. Get Approved Today. No Fees, Quick Withdrawal.

We are an international financial company engaged in investment activities, which are related to trading on financial markets and cryptocurrency exchanges performed by qualified professional traders.

Our goal is to provide our investors with a reliable source of high income, while minimizing any possible risks and offering a high-quality service, allowing us to automate and simplify the relations between the investors and the trustees. We work towards increasing your profit margin by profitable investment. We look forward to you being part of our community.

Visit Uniqtak today, register for free, save as investment and make no less than 30% interest under a month.