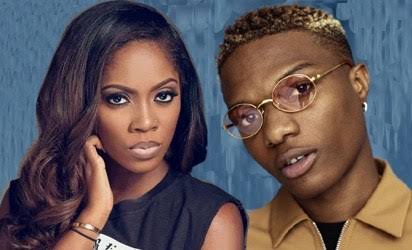 African number one bad girl has fans cracking with laughter after she responded to a fan’s question – The Twitter user identified as @williamserena5 had asked who is the richer musician between Wizkid and Tiwa Savage – In response, Savage stated that she has been calling Wizzy to even borrow money Singer Tiwa Savage has social media users cracking with laughter after dishing a hilarious response after a fan asked who is richer between Savage and Wizkid.

Also according to reports, Tiwa’s current net worth is around N1.8 billion while Wizkid is worth a whopping N4 billion, making him one of the richest African musicians of our time. So it wasn’t far fetched when Tiwa laughed off the enquiry of the Twitter user who asked who is richer between her and Wizkid. In response to the post, Savage stated that she has been calling Wizzy to borrow money but the young artiste has been missing her calls. Her hilarious response shows the cordial relationship she has with the musician and it is almost commendable.

Tiwa Savage ✔ @TiwaSavage Abeg o, me that have been calling to borrow money sef. Baba give me missed calls https://twitter.com/williamserena5/status/1173127365226110976 … williamserena @williamserena5 Wizkid and Tiwa Savage: who is richerhttp://bit.ly/tiwasavagee #mtntweetguest #np #queen #freestyle 15.5K 10:17 AM – Sep 15, 2019 Twitter Ads info and privacy 3,628 people are talking about this