Speaker of the House of Representatives, Rt. 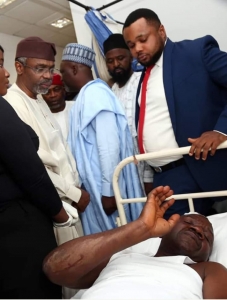 Hon. Femi Gbajabiamila, on Tuesday visited one of the wounded officers in the National Assembly attack, Igbere TV reports.

Igbere TV reports that members of the Islamic Shiite group, had on Tuesday, attacked some officers when they invaded the NASS complex in protest against the continued detention of their leader, El-Zazaky.

The wounded officer was identified as Inspector Ahmed Seini, who is currently admitted at the National Assembly Clinic, Abuja.

Igbere TV reports that the speaker visited alongside other honourable members of the House.